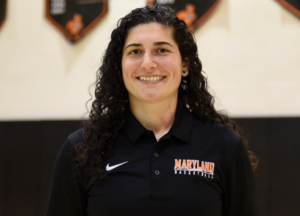 MSD Athletics is excited to announce that Elena Ciccarelli has been selected as the new Assistant Athletic Director for the Frederick campus.
On Friday, July 22, MSD Athletic Director Andy Bonheyo announced the hire of Elena Ciccarelli as the new Assistant Athletic Director for the Frederick campus.
Elena has worked at MSD since 2015 in various roles. She started her career as an RCYCP with the student life department for two years and later became a teacher's aide with the elementary department. For the past four years, Elena has taught Physical Education.
Elena is no stranger to the athletic department. Since Elena stepped foot on campus, she has coached several high school and Special Olympics programs. Elena was an assistant coach with the varsity girls basketball program from 2015 to 2019, winning two national championships. Then she became the program's head coach, leading the team through the pandemic until she stepped down in 2021 to focus on her growing family. Elena also coached MSD's Special Olympics Unified Soccer team for three years, first as an assistant coach and then as the head coach for the next two years, where the 2018 team won the State Championship. In the department's time of need during the 2021-2022 school year, Elena graciously stepped in and served as an assistant coach for MSD's high school volleyball, girls' basketball, and softball teams. She has recently served as a co-interim assistant athletic director alongside Neal DiMarco since November 2021.
Outside of MSD, Elena remains active in her athletic endeavors. Elena volunteers as the assistant camp director for the annual National Deaf Girls Basketball summer camp. She is also a gold medalist with the women's basketball national team that competed in the 2014 U-21 World Championship in Samsun, Turkey, and with the national team that also won in the 2015 World Deaf Basketball Championship in Taoyuan, Taiwan.
It must be highlighted that in all of the awards and honors she earned throughout her athletic career, Elena was the first student-athlete at Gallaudet University to compete in three sports—women's soccer, women's basketball, and softball—throughout her four-year athletic career. in 2015, she was recognized as an NCAA Woman of the Year nominee. Elena is the epitome of a student-athlete, a true teammate, and a role model.
In this role, Elena will continue to lead MSD's Special Olympics program.